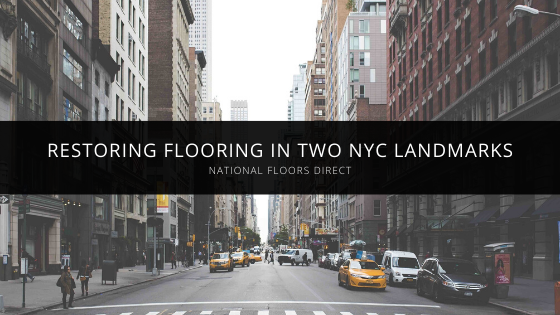 From the Statue of Liberty to Central Park and Madison Square Gardens to Coney Island, New York City boasts several of the United States’ biggest tourist attractions. The metropolis is also home to millions. NY-based companies like National Floors Direct are committed to keeping the Big Apple bright for generations of residents and visitors to come, beginning with restoring and renovating some of its most significant local hotspots.

Recently, the Astoria-based flooring company contributed to the restoration of two of New York City’s historic locales: the Canal Street Market and Pier A Harbor House.

The Pier A Harbor House, which opened in 1886, was initially a headquarters for the New York Harbor Police. After many years in disrepair and input from local historical committees, restoration efforts commenced. National Floors Direct was hired to restore the floors for the Harborhouse as well as BlackTail restaurant. The restaurant, which was voted 29 of the 150 best bars in America by The Daily Beast, harkens to the speakeasy days with a unique and captivating prohibition-era atmosphere and vintage-inspired drink menu.

The Canal Street Market, located between Soho and Chinatown, is similarly of historical and cultural significance to NYC and its residents. The market, similar to a bazaar, is simultaneously a food hall, retail shopping center, and community gathering space used for a range of purposes and open year-round. When the flooring needed to be replaced, the owners relied on customer-and-community-focused National Floors Direct for the job.

National Floors Direct’s reviews are a testament to their fantastic customer service and an extensive range of high-quality products from some of the world’s biggest manufacturers. Taking a revolutionary approach to flooring, they provide the perks of high-end retailers at the price of big-box suppliers, guaranteeing the lowest price in the industry.

With a service region encompassing much of the Northeast, including Massachusetts, New Hampshire, Maine, South-eastern Vermont, Rhode Island, Connecticut, New York, New Jersey, and Eastern Pennsylvania, and a slew of five-star reviews, National Floors Direct is known throughout the East Coast for their white-glove service and fantastic selection.
Visit the company’s new website to peruse National Floors Direct reviews and products, or request an estimate: www.nationalfloorsdirect.com